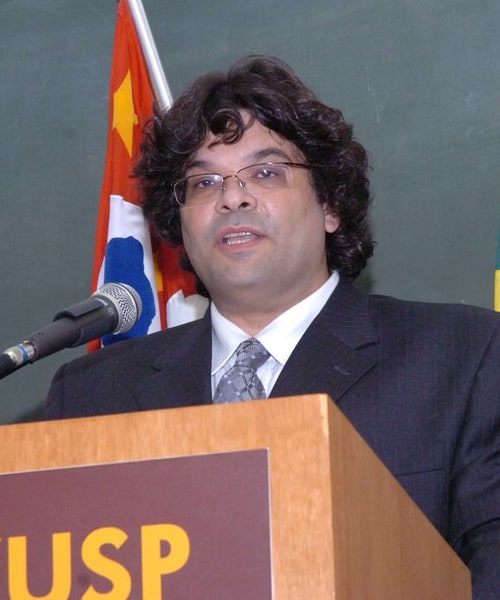 He has an undergraduate degree in Biological Sciences from the Faculdade de Humanidades Pedro II (1989), a master’s degree in Vertebrate Evolution from the Université Paris VII – Pierre et Marie Curie (1990), a doctoral degree in Systematics and Evolution from the Muséum National d’Histoire Naturelle in Paris (1994), and postdoctoral research from the American Museum of Natural History in New York (1998) and the Museu Nacional do Rio de Janeiro (1997). He obtained his Habilitation (Livre-Docência) in 2004 from the Museu de Zoologia da Universidade de São Paulo. He is currently Professor at the Museu de Zoologia, where he acts as curator of the Herpetology and Paleontology collections and supervises in the Graduate Programs in Zoology at USP and UNESP-Rio Claro. He is Chercheur Attaché of the Muséum National d’Histoire Naturelle de Paris, Research Associate of the American Museum of Natural History, member of the Council of the Brazilian Society of Zoology, advisor of BIREME/PAHO/WHO and scientific coordinator of the virtual library program SciELO Biodiversity. He is editor in the journals Papéis Avulsos de Zoologia, Arquivos de Zoologia, and South American Journal of Herpetology. At the Museu de Zoologia of USP, he served as Head of the Biological Station of Boracéia, Head of the Vertebrate Service, Director of the Cultural Dissemination Division, and Director of the Museum. He has experience in the areas of Zoology and Paleontology, with emphasis on the systematic and evolutionary patterns of reptiles. He is especially dedicated to the study of the origin and evolution of snakes.

Systematics and Evolution of Amphibians and Reptiles.