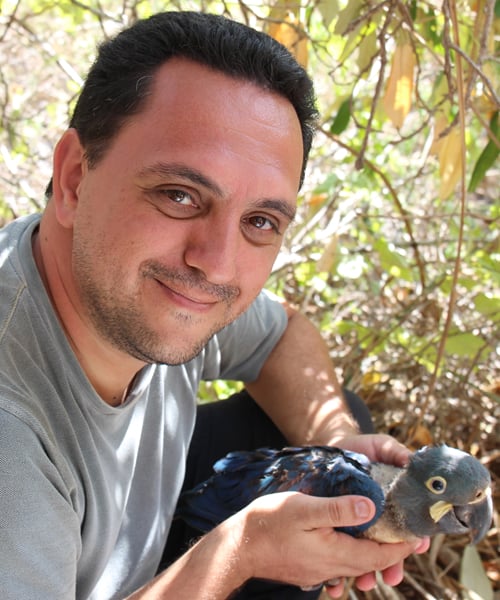 As a Biologist, he concluded in 2003 his doctoral degree in Biological Sciences (Zoology) at the Universidade de São Paulo. He is the Ornithological Collections curator of the Museu de Zoologia da Universidade de São Paulo (MZUSP), acting curator of the MZUSP Mastozoology collection, and collaborating professor in the Department of Zoology of USP. He is a CNPq Level 1B researcher and Associate Editor of the Revista Brasileira de Ornitologia, Zoologia, Papeis Avulsos de Zoologia, Biota Neotropica, and Iheringia. He is also a member of the Brazilian Committee of Ornithological Records (CBRO), Associate Researcher of the World Pheasant Association (UK), and member of the Galliformes Specialists Group, IUCN. He has published 169 scientific articles in refereed journals, 17 books, 98 book chapters, and has over 150 presentations in congresses in Brazil and abroad. He has already received fifteen awards or honors for works or projects developed in partnership with other colleagues. He acts as ad hoc advisor for state (FAPESP), national (e. g. CNPq), and international (e. g. FONCyt, Argentina) funding agencies and for more than 50 scientific journals in Brazil and abroad. He supervises students of Scientific Initiation, Master’s Degree, and Doctoral Degree, besides supervising postdoctoral researchers. He has supervised 24 Master’s Degree Theses, 11 Doctoral Degree Dissertations, 5 Postdoctoral Researches, and 22 Scientific Initiations. He has 62 completed supervisions (IC, MS, DR and Postdoc). In collaboration with colleagues, he teaches two undergraduate and two graduate courses, and is an accredited supervisor for the graduate programs of the Museu de Zoologia, the Department of Zoology of USP, the Fauna Conservation Program of the Universidade Federal de São Carlos, and the Fundação Parque Zoológico of São Paulo. Currently coordinates ten research projects. The projects developed in the laboratory are (or were) supported by CNPq, CAPES, FAPESP, International Conservation, Moore Foundation, and O Boticario Foundation of Nature Protection. He acts mainly in the areas of systematics, taxonomy, and conservation of neotropical birds. He is Scientific Director of the Museu de Zoologia da Universidade de São Paulo (MZUSP), President of the Research Commission of the Museu de Zoologia da Universidade de São Paulo (MZUSP), President of the FPZSP Supervising Board, First Secretary of the Brazilian Society of Zoology (SBZ) and represented the Ministry of Environment at the National Council for the Control of Animal Experimentation (CONCEA), linked to the Ministry of Science, Technology, Innovation and Communications (MCTIC). He has experience with Systematics, Taxonomy, and Neotropical Bird Conservation and also develops projects of reintroduction and ex-situ management of threatened species, such as the Alagoas curassow, the great-billed seed finch, the Brazilian merganser, and the Brazilian ararajuba.

Systematics, Taxonomy, and Conservation of Birds